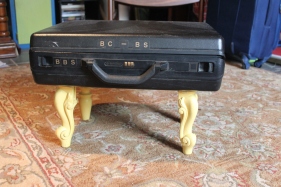 Years ago, at Freret Market in New Orleans, I found a repurposed drawer that someone had attached legs to. It was super cute, but it was not the sturdiest thing and lasted a few years before the drawer gave out. The legs were made of plastic and still good, so I thought I could use them in a side table solution for our futon.

There’s a thrift store near me, that always seems to have old suitcases and briefcases, so I popped by and bought a briefcase. Their were prettier suitcases, but the briefcase had pockets to allow for organizing and fit better in the space.

So the briefcase won. The rest was fairly easy. I drilled four holes in bottom of the briefcase and new holes in the tops of the legs. Four screws and four washers later, I had attached the legs to the briefcase, and I had a new side table.